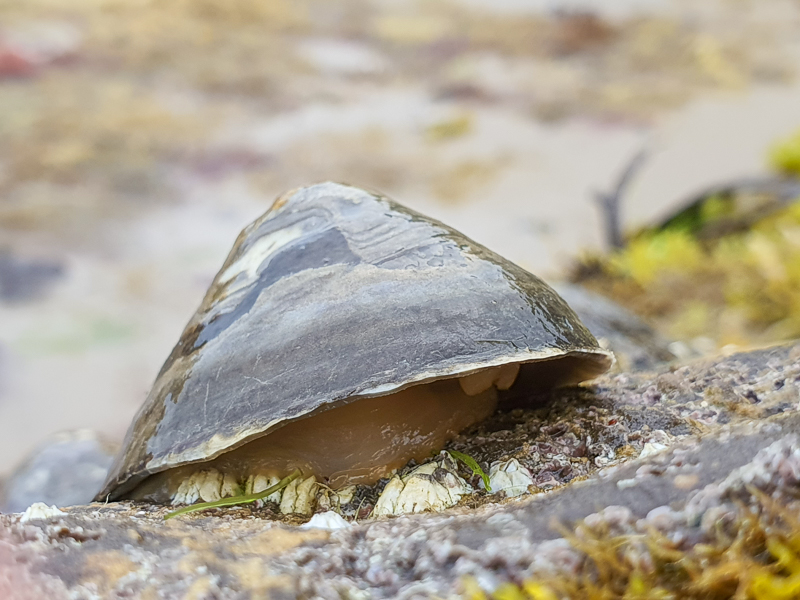 It's a grey Sunday evening in July. England are playing in the Euro Cup final. I'm on St Helen's beach on the Isle of Wight, rock pooling. I've been reading Rock Pool, and I want to see if a particularly surprising part of the limpet's profile is true.

I've waited patiently for the tide to retreat far enough to reveal a path to the pools. Contrary to what a man loudly mansplaining how tides work is saying, low tide isn't for another hour. Plenty of time to investigate what the retreating sea is revealing. 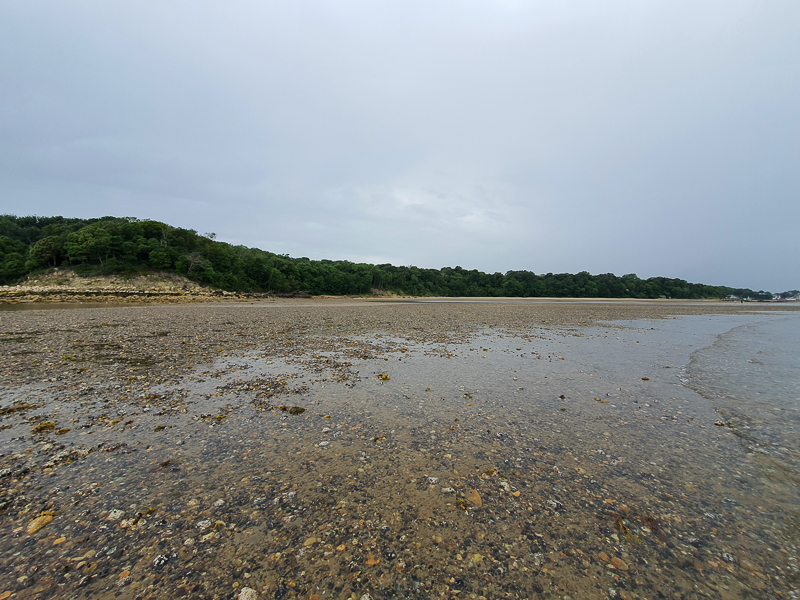 I start picking my way through the seaweed and my attention is caught by iridescent limpets. I crouch next to a rock with several large limpets on, thrilled to see that they're active. They look still, but they're out of their homes - their scars on the rock that fit perfectly to their shell. This means they're feeding or returning home.

I steady myself closer and peer underneath the shell of the nearest limpet. There's the mollusc bottom and something else, something detached from the rest. Its mouth? And two long stems like the eyes of a garden snail, but with no little black dots.

When the limpets are in their depression in the rock, you can't see anything of the living creature beneath the shell. It's easy to imagine that they're empty. But I can see this one; is it touching? Feeling? Seeing? Smelling? I look at the other limpets on the rock. They're strikingly beautiful up close. Rings of iridescent grey and blue, encrusted with bright white acorn barnacles. 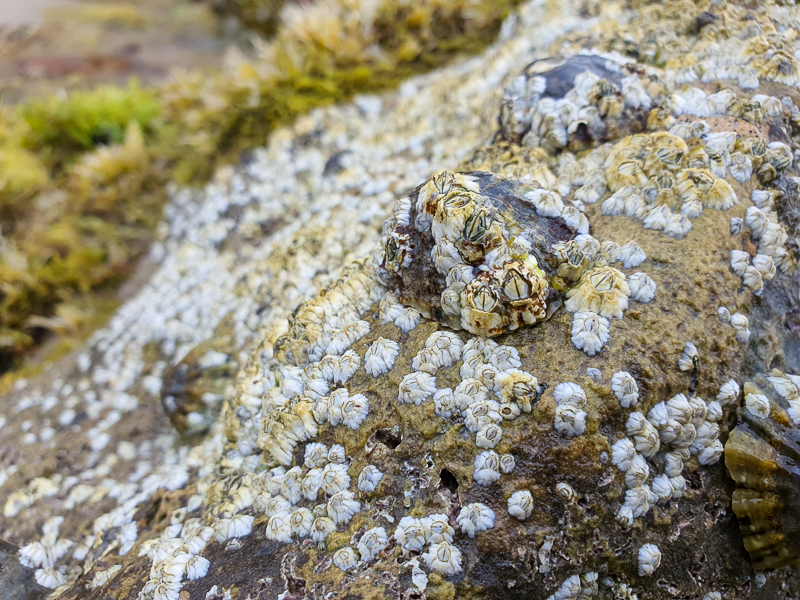 As I crouch by the rock, my face centimetres from the limpets, I hear it. A light, determined scraping sound.

I listen harder and now I can hear different pitches of sounds; it sounds like the toe of a shoe being twisted into gravel, or a high heel scratching on the pavement. I stare hard at the limpets, trying to isolate one of the sounds so I can determine its source. I concentrate on one limpet that seems particularly active. I'm sure now - the noise is coming from the limpets!

There are two types of sound, a light bubbling noise that sounds like someone nearby is eating popping candy, and a deeper, scraping sound. I know what the scraping sound is, but I can't believe I can hear it. In her book, Heather Buttivant says that she can hear the limpets, but I dismissed it as an exaggeration or something that came from years of work on the shore.

What I can hear is these hardy snails scraping at the substrate of the rock. I can literally hear snails gouging through rock.

I stay for a little while longer, listening to each limpet, wondering at the different sounds they're making. After a few moments, I sit back and listen to the sounds together. As a result of my close listening, I can identify which limpet is making each of the sounds I can hear. 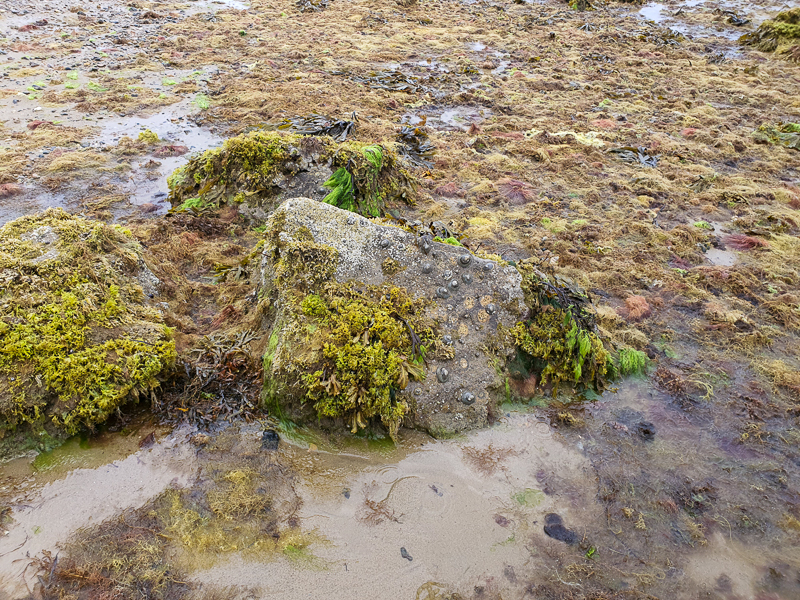 A red and grey limpet almost entirely encrusted with barnacles towards the top of the rock is perhaps making a new home scar - he's twisting his shell back and forth, generating a high pitched, intermittent scraping sound.

A large, probably female iridescent limpet towards the bottom of the rock is making a deeper, more serious sound; I think she's feeding. A smaller limpet to the left is making the snap, crackle and pop sound - is he eating too, or is that sound something else?

The beach beyond the rock is beautiful and deserted, so I leave the limpets to it and head for the sand banks where the egrets are fishing.

Halfway across the beach, I get an itching feeling. I didn't spend long enough with the limpets. The memory of their sounds is starting to fade already. Was it more of a rasping or a gouging? What noise was the limpet in the middle making? I turn back to listen again, but on my way back it starts to rain.

When I make it back to the rock that the limpets are on, I crouch and put my ear next to them, but I can't hear them now over the rain.

Mild panic sets in. What if that was the only time for me to hear limpets? The experience felt too short. I try in vain to hear them over the rain but it gets heavier, so I walk back across the beach, ankle-deep in water and trying to distract myself from the limpets by searching for crabs. 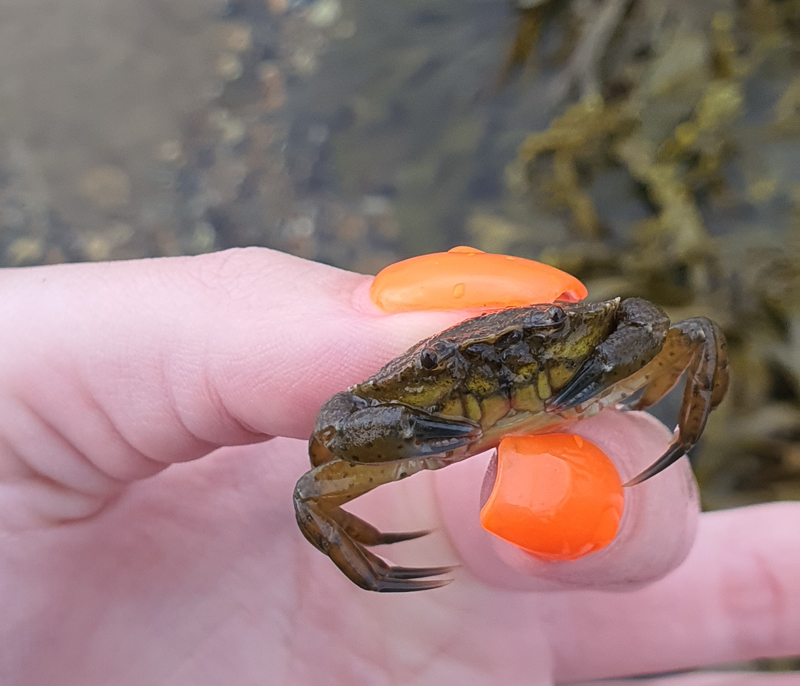 I'm face to face with a green shore crab when the rain breaks. It stops running in rivulets down my arms and dripping from the peak of my hood into the rock pool. I look up, and I'm at the far end of the beach. I scan around; no limpets visible. I set off, clattering across the beach. As the rain starts to fall again I pick up the pace, shoes slipping on the rocks. What if the limpets have finished feeding?

I spot the rock from a distance and hurry towards it. I throw myself into the sand and put my face near the limpets. At first, disappointment fills me - the rain is quieter now, but I can't hear them. Perhaps I imagined it the first time.

I focus on a limpet that is still up and about and strain to hear. There it is! A faint scraping sound. Just like that, as if someone has spun the volume button, the sounds of the other limpets start flooding back in. Even the limpets that appear completely still are busy under their shells; I can hear them working away at the rock, scraping off the microalgae.

The sounds of the beach - the gulls, the rain - fade away as I enter the smaller world of the rock. From a distance, the rock looks devoid of life - statue-still limpets and not a lot else, but up close it's cosmopolitan. 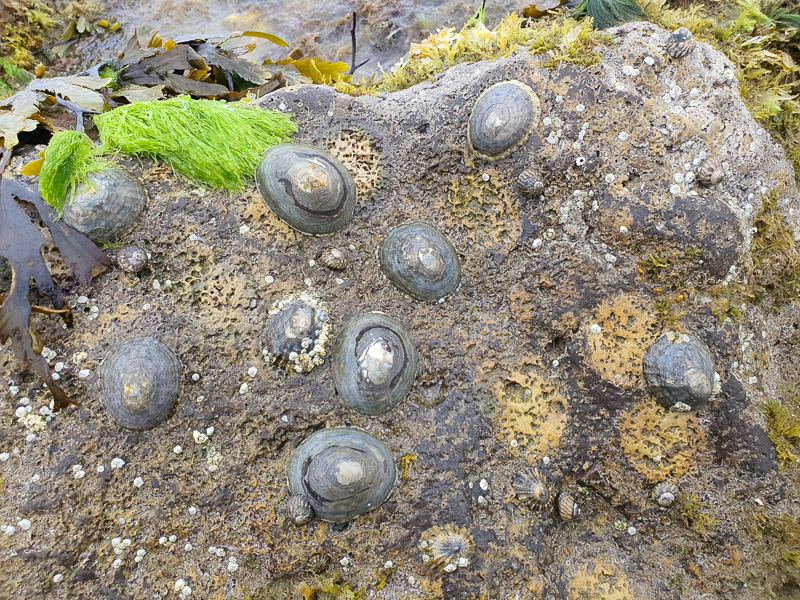 The limpets are busy - different sizes mean different sexes, and there are males and females here. Between the limpets there are sandhoppers and flies. Even the limpet shells sport life: barnacles and periwinkles. The limpets go about their business - moving house, feeding, returning home - and I stare in wonder, my legs going numb.

People walk past and say hello, but they don't ask me what I'm looking at. I wonder if they know that you can listen to limpets scraping the rock? I wonder if they did, whether they'd still walk past. Is this a magic that only some of us appreciate? I always find it hard to tell.

It is unbearably fascinating to me. I find it hard to pull myself away, so I don't. I settle myself into a more comfortable position and focus my attention on each limpet in turn. Some are bold, lifting their shells high and moving around. Some are more reserved: feeding in place with their shells tight to the rock. The limpet at the top is still turning in half-circles, grinding a home into the rock. 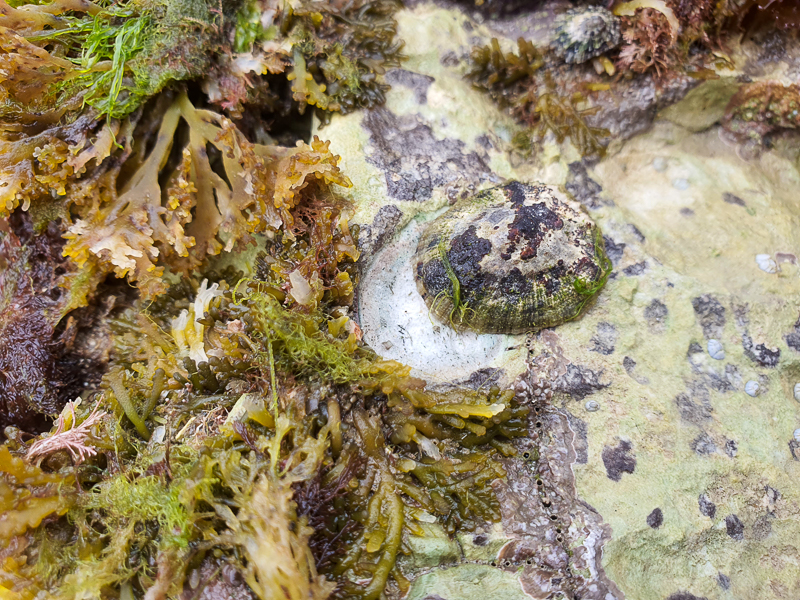 A limpet on its way home

I feel a burning need to learn more about these creatures. What do they look like underneath the shell? How do they form their shell? Who are they eaten by, and how? As I look around the beach, I try to take in the beauty of the woodland and the shore but it feels too much to absorb. I feel like the wonder of it all, the perfection of the natural world, will consume me, break me up.

My heart feels full, bursting. I wonder at the trees - what species are here? Were they planted, or self-seeded? What life do they support? Everywhere I look is a world of information I want to know. What are the names of the seaweed? I can see long, thin seaweed that looks like hair; thick, bumpy seaweed like a dragon's back; small, fluffy seaweed like a powder brush; and thick, strong seaweed with round pods. How do they grow?

I wait by the rock, hunkered down, until the limpets finish their activity for the evening. They fall still and the grinding and scraping noises fade away. I feel - know - that I have experienced something very special.

As I walk away, I notice another rock with limpets. I lean down to this one and, sure enough, I can hear the limpets here too. Just like before, I can hear an orchestra of sounds - each limpet behaving slightly differently, making different sounds. I can't leave this rock until they quieten down either, although I'm soothed to know that it wasn't a one-off.

As I amble through the shallows, I spot some seaweed that looks as if it has a leopard print pattern. On closer inspection, the pattern is made up of small beings - star shaped, blue creatures. A constellation on the underside of some seaweed. They look like they could be the star ascidian sea squirt colonies Buttivant spoke about. Another thing I didn't think I'd see. 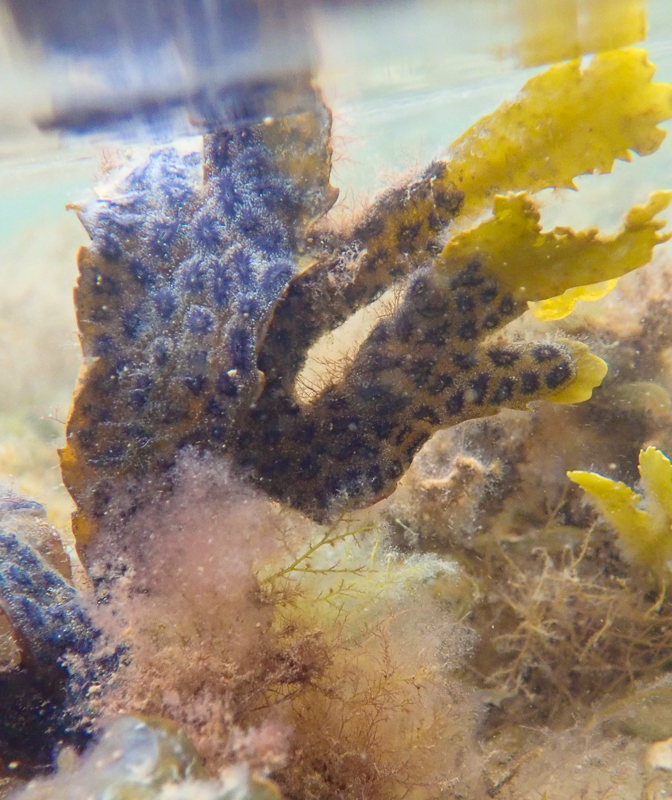 I lean down to take close up photos with my waterproof camera and marvel at the delicate shapes. Something tickles my leg; a curious shore crab is halfway up my ankle. I look around and breathe in deeply. There's nobody around. On this beautiful beach, it's just me, a black backed gull and this crab.

As I leave the beach, wondering if this is my favourite beach in the world and whether listening to limpets might be my favourite wildlife experience, I turn back to look across the salt marsh and see that the sun has projected a rainbow over the access to the beach.

Two bleached deadwood trees stand within its double arch, a rook on one and a painted fairy door on the other. The light is golden, the rain steady, and the rainbow is strong and bright. 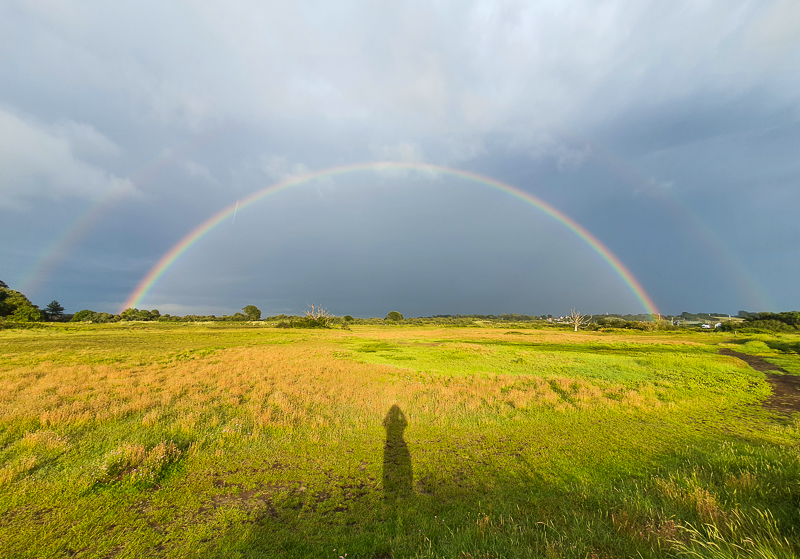 Read five really cool things about limpets here, about rockpooling in Ventnor here, and about the great book that prompted all of these limpet shenanigans here!