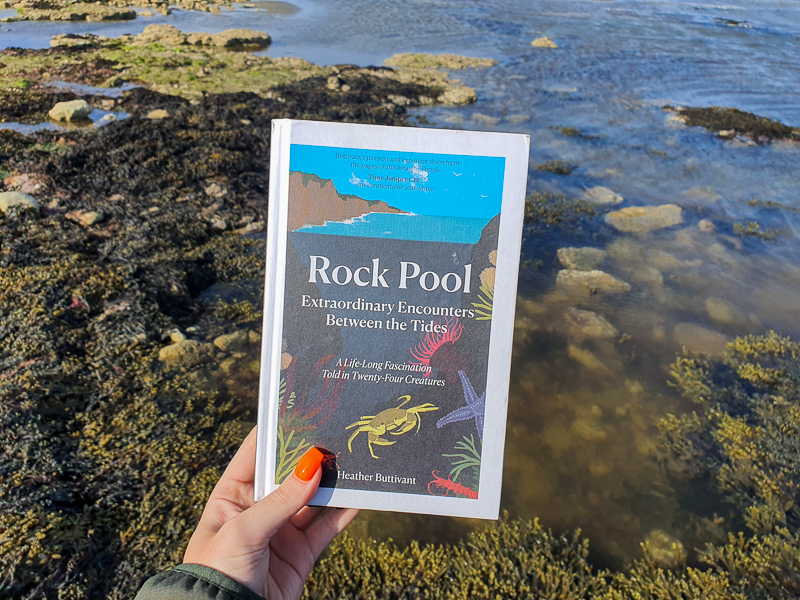 This fantastic book opened my eyes to new lives and loves on the shore.

I thought that I wouldn’t learn much, given I’ve been rock pooling since I was a child, but Buttivant reveals mysteries about the common creatures of our beloved pools and introduces some characters you’ve probably never seen.

As is often the case when you read about nature, I found that, rather eerily, after I read this book I saw things I’d never knowingly seen in rock pools before – even though they must have been there all along.

I learnt about those worm casts you see scattered across the sand, marvelled at the sound of limpets on rock, peered into constellations of sea squirts, and looked into the eyes of green shore crabs.

The book is split into twenty-four chapters, each focusing on a creature to be found in our costal pools. Occasionally, I felt like I had failed in my earlier rock pooling adventures – I’ve still never seen a starfish on the shore in the UK, despite Buttivant claiming that ‘a visit to the rock pools never feels complete without a starfish’.

Overall, though, the book is engaging and approachable. It’s easy to read and the separate chapters for each species make it perfect for dipping in and out of on a sun lounger. Some species from the book – like goose barnacles and sea slugs – still elude me, but that just makes returning to the shore even more exciting.

The hardback edition of the book is beautiful, and survived being bolstered around my beach bag, dropped in the mud, and accidentally dipped in a rock pool or two. The chapters start with drawings of the species, and photographs are scattered throughout as helpful reference points.

Rock Pool prompted a lovely new ritual for me: each holiday, I’ll take a book on a subject that I can explore while I’m there. We so rarely get the time to look closely at what’s around us, to read slowly and search for the things we’re told about – books like this give us the opportunity to do just that, and to come away feeling all the richer for it.