NatureNature Writing
WHY DO JELLYFISH WASH UP ON THE BEACH? 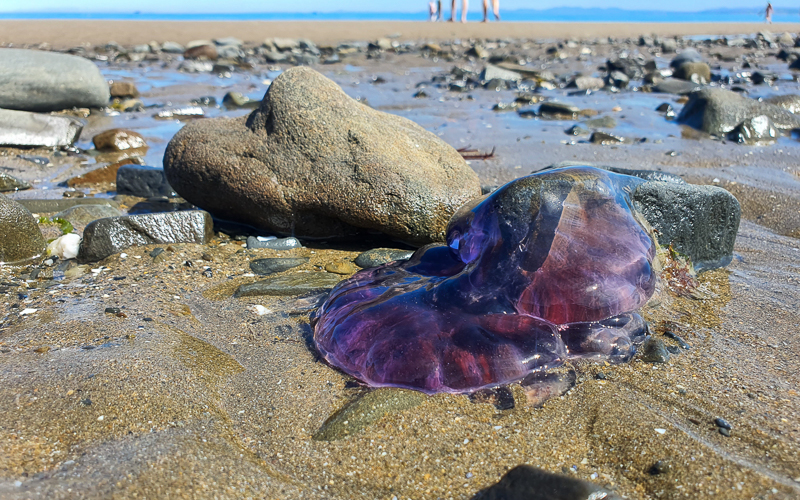 We scramble down some steps and emerge from a tangle of trees onto sweeping Cei Bach Beach in Wales. The day is warm, the waves are gently retreating, and a line of seaweed draws the high tide mark.

Towards the sea, something deep purple glistens in the morning sun. On closer inspection, it's not litter but a jellyfish, draped over a rock above the reach of the waves. A blue jellyfish.

Like a floodgate has been opened, we notice the other jellyfish strewn around the shore. The more we look, the more seem to materialise.

Clear, globular jellyfish containing four pale rings of purple: moon jellyfish. Others are fringed with deep brown, a pattern of extending lines branching out from a perfect circle in the centre: compass jellyfish.

Some of the jellies are still vibrant, shining colours matching the pages of my ID book. Others are shadows of their former selves: tentacles bundled up beneath them or torn away, colours faded almost to nothing, shape squashed and deteriorating.

Why are they here? In Wales, jellies aren't part of the everyday beach debris; what prompts them to arrive on our shores? 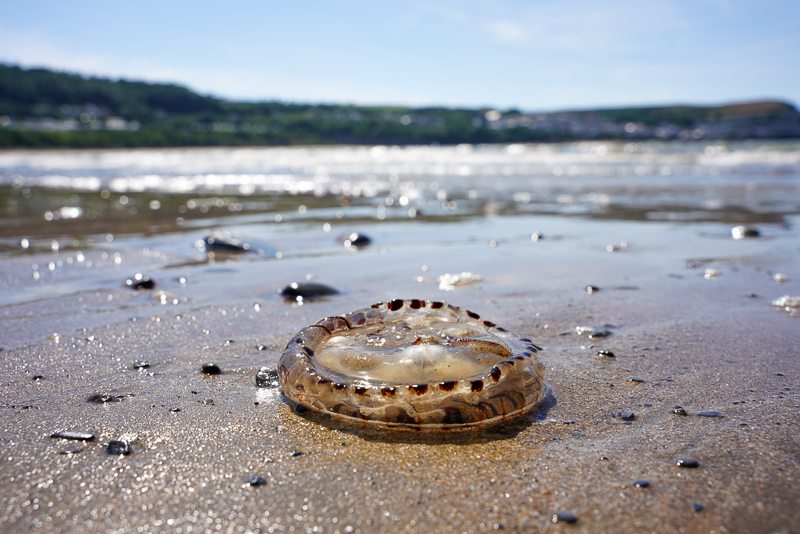 A few days later, my sister and I are exploring barnacle-encrusted rocks in Llangrannog and peering into the tiny tidal pools left in the depressions.

There are all the usual goings on: dog whelks stealthily pursue prey, limpets feed and move over one another on their travels, fish flit between the seaweed. There, too, is something we've never seen before.

A tiny, oblong growth is resting on the rock, exceptionally thin extensions waving around in the water, thinner than a human hair but with the same appearance. There are a small collection of them, and we squint to make out their form.

Could there be a connection between their arrival and that of the jellies?

Rachel Carson writes in The Edge of the Sea that 'in the litter and debris of the beach there may be few living creatures, but there is the suggestion, the imitation of a million, million lives, lived in the sands nearby or brought to this place from far sea distances.'

What brought these jellies here, so that we could feel the imitation of their lives? 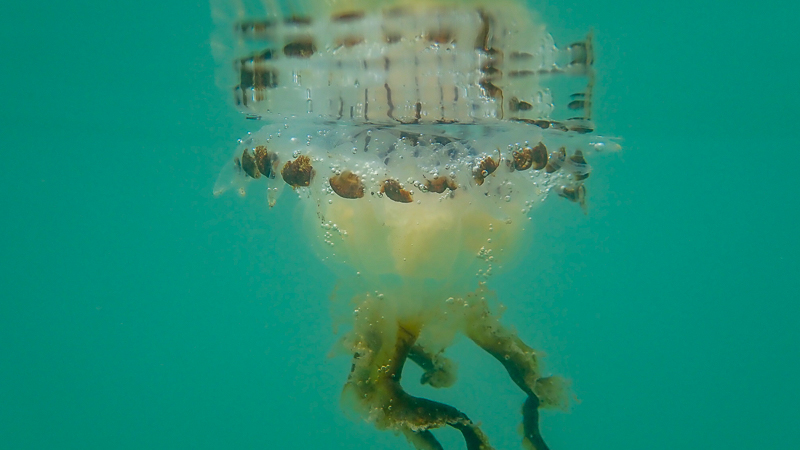 Writing about moon jellies, Carson explains that they head towards the shore near the end of their lives. They offer no resistance to the tidal currents, so each flood tide brings them onto the beach. Why would the jellies be okay with getting stranded on the beach?

They're carrying their young. In flaps of tissue hanging from the underside of their disc, the pear-shaped larvae prepare for a new life. When shaken loose from the parent or released by the stranding of the parent on the shore, they swim about in the shallow water.

After a while, they attach to the bottom and, as tiny plantlike growths with thin tentacles, the children of the jellies survive winter storms in the relative security of the shallows.

Later, constrictions begin to appear on the body of this curious creature. The plantlike growth seems to extend and become a set of rings, going on to resemble a stack of saucers. When the weather turns warmer and the winter storms quieten, each of the saucers breaks away - a baby jellyfish.

In a single season these tiny saucer-like discs will grow into the adult forms. Even the huge great red jellyfish reproduces in this way; tiny discs the pre-cursor to a huge jelly whose tentacles sometimes trail for fifty feet or more. 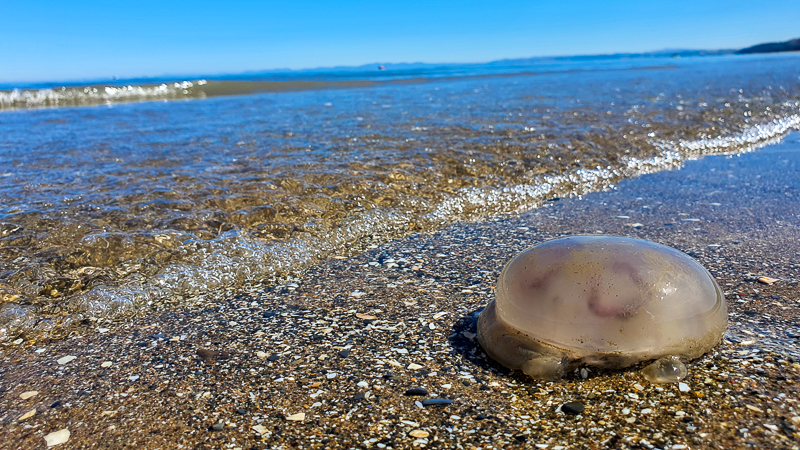