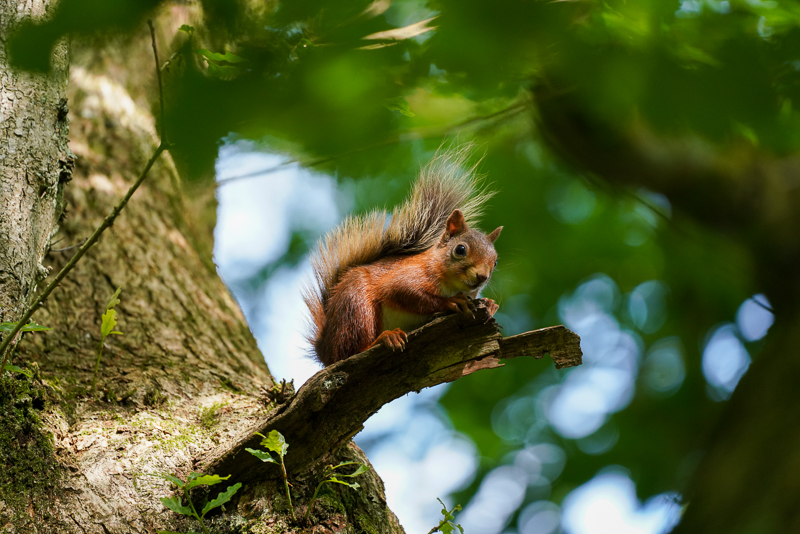 I wait patiently on a wooden bench at the base of an old, twisting oak tree. It’s early morning on the Isle of Wight, and I’m waiting for red squirrels.

In 1946, Edward Step described squirrels as 'the most popular of all our native fauna'. He was talking about red squirrels, and his statement rings true today.

Things have moved on since the '40s, though, and we're now far less likely to see a red squirrel than we would have been in Step's day.

When he wrote about red squirrels (he just called them 'squirrels', as there was little need to differentiate), he noted that in some areas of London one could spot a grey squirrel, an American visitor. He explains that some years prior, caged grey squirrels in Regent Park's Zoological Gardens had been released, and spread within the city.

Step finishes by saying that 'British naturalists of a not-distant future will probably have to include two species of Squirrels in their lists'. At the time, I don't think he quite appreciated the capacity grey squirrels had to wreak havoc on our native red squirrel populations, and perhaps imagined them living alongside in harmony.

Thankfully, we can still include two species in our list, but the future of red squirrels is uncertain. The numbers currently stand at 140,000 red squirrels to 2.5 million greys, and the direct comparison is stark because grey squirrels out-compete red squirrels for food and habitat, as well as carrying the squirrel pox virus, which is often fatal to red squirrels.

Most of our red squirrels now live on islands (like the Isle of Wight or Angelsey) or in Scotland. Although declining habitat could have contributed to the red squirrel's dwindling population numbers, their decline maps with the spread of grey squirrels and it's accepted that reds and greys can't live together long term. Squirrels are the poster species for the ecological threats posed by invasive non-native species.

Seeing a red squirrel today, in England, is a very special event. 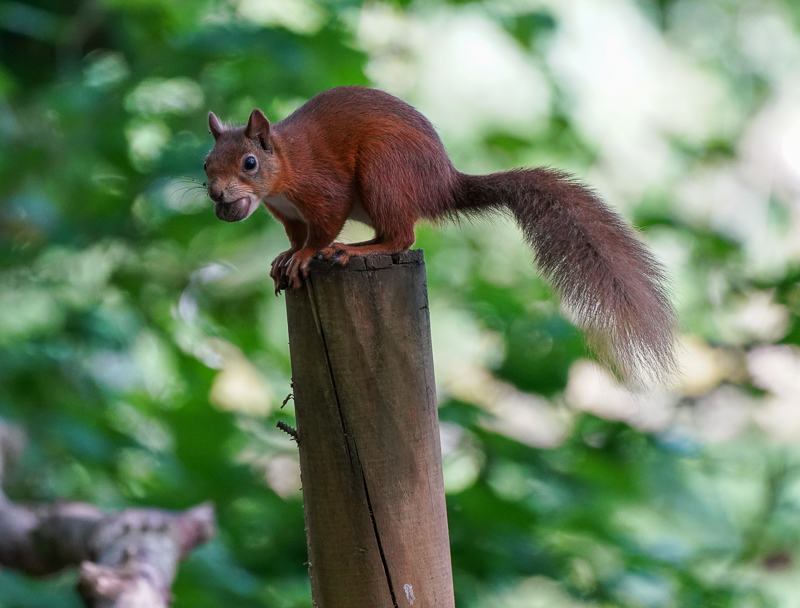 I’ve spent no fewer than a dozen summer holidays on the Isle of Wight and have never had more than a fleeting glimpse. Red squirrels aren’t brazen and cheeky like greys – they’re quiet, shy, careful, so I try not to put too much pressure on the morning. I satisfy myself with enjoying watching jays in the treetops, the morning light filtering through the canopy.

Eventually, as my legs are starting to go numb, a red squirrel clatters down a distant trunk and perches on the fence post furthest from me. I lift my camera and try to get a photograph in the low light; one eye down the viewfinder and one tightly shut in concentration, trying to keep the camera steady. I’m so convinced that this is a once-in-a-lifetime view of a red squirrel that I barely dare blink in case I miss any of it. I’m torn between looking through my binoculars for a better view or using my camera, so I have images to remember this by.

The squirrel curls its tail up behind its head, holding a nut in its hands. The perfect pose. 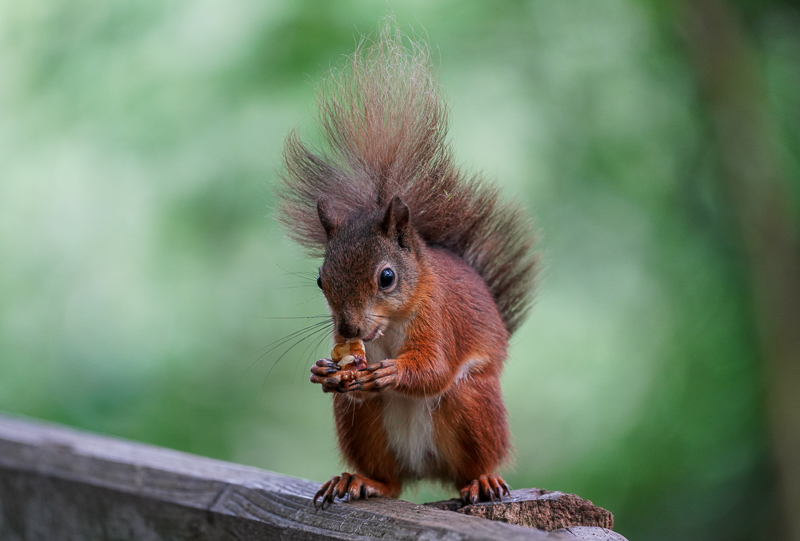 Something interrupts my concentration – a noise by my feet. I don’t lower my camera. Dunnocks, great tits, blue tits and robins, plus all their juveniles, have been hopping around my feet all morning, making me feel like Snow White (or should that be Snow Wight?). It’s heart-warming and special, but I can’t miss a moment of the squirrel.

As my subject is turning to scamper back up the tree, I feel a small weight pull on the front of my jumper. Feeling that the moment with the squirrel on the post is probably over, I lower my camera and look down, rather apprehensively.

One of those shy, quiet creatures, reclusive and difficult to see, is on my chest.

A red squirrel is sniffing my chin, opening my hand to see if I have any food in it. I had worried that my zoom lens wouldn’t be long enough to capture a close up shot of the squirrels and now there’s one centimetres from my face. 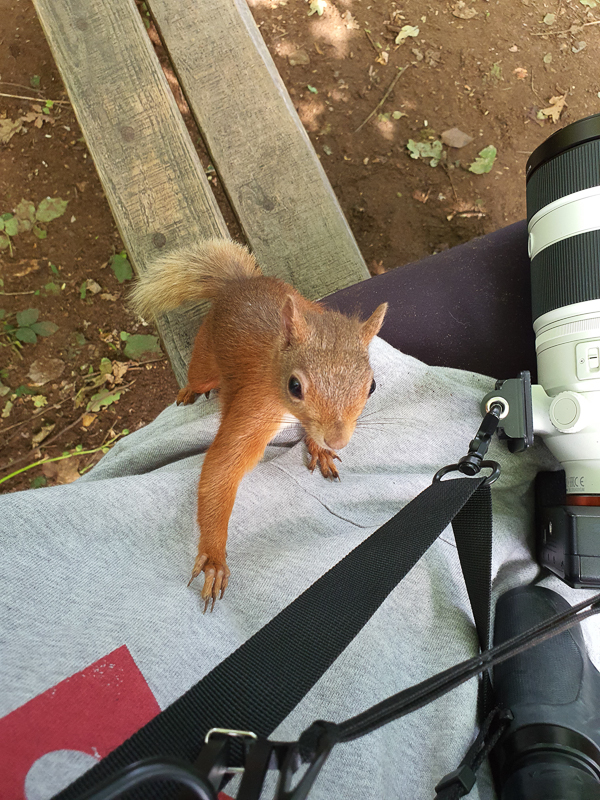 She’s tiny; she could sit on the palm of my hand. Her fur is a warm russet red, with a dark ombre streak down her back and snowy white on her tummy. Her tail’s blonde and perfectly groomed, her nails sharp. When she realises I’m not holding any food, she clambers down my leg and hops off.

I feel like my heart might burst. The moment is so precious, so fragile. And unexpected – I’d made no effort to attract squirrels close to me and hadn’t noticed this one until its whiskers were tickling my neck. Sometimes the natural world offers you something special without you even asking.

After that, I can't keep track of them. One is scratching at my bag while I look at a woodpecker through my binoculars. Another is sat on the bench next to me whilst I photograph one further away. Pairs chase each other in helter skelters up and down the tree trunks. 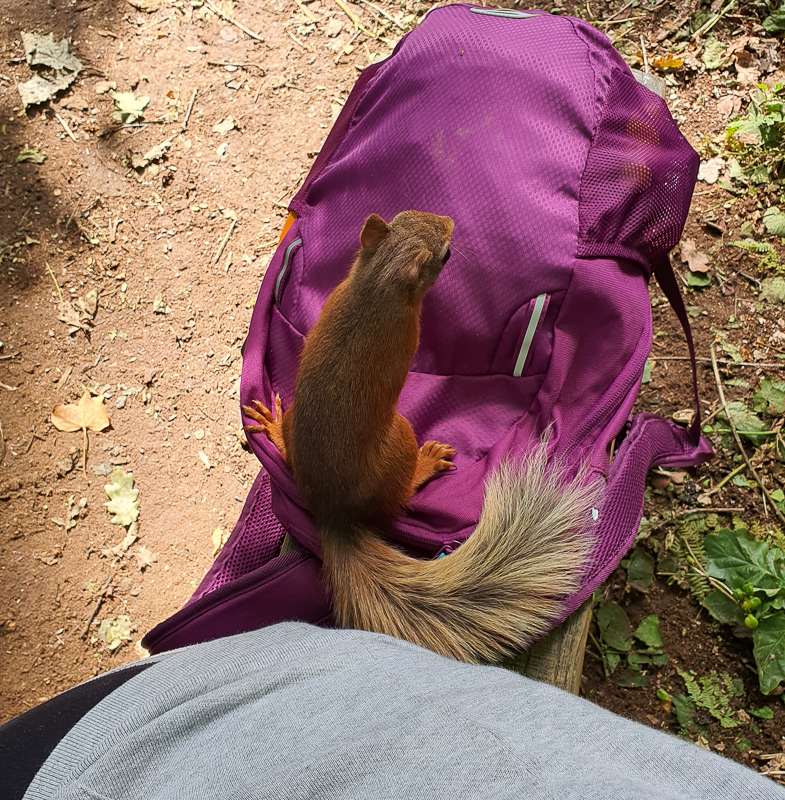 My heart is full and broken at the same time. It swells at the sight of such perfect little creatures, but fractures when I think of their plight, of how vulnerable they are to extinction here.

I vow to go back another day. You can read about my second day here.

WHAT ARE INVASIVE SPECIES?

Invasive non-native species get a lot of heat in the conservation community...but what makes a species invasive?