NatureGuides
HOW TO SEE KINGFISHERS 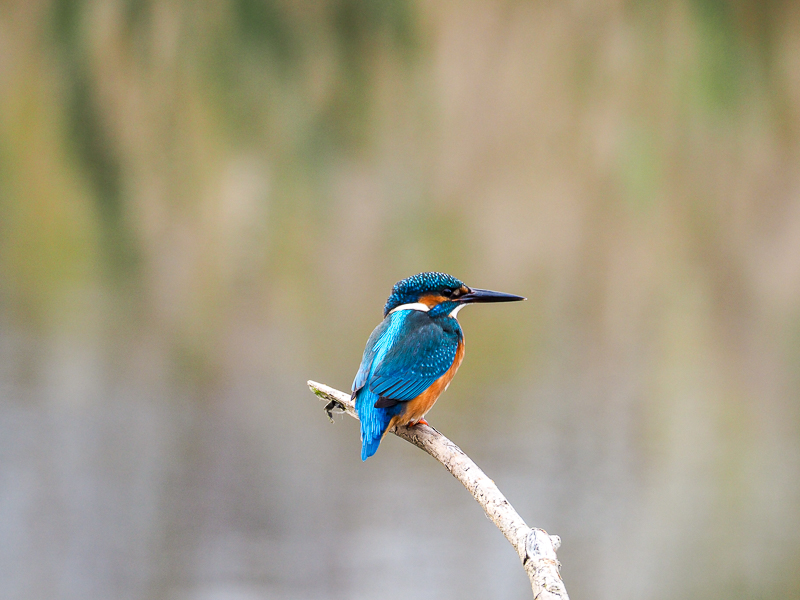 Some people seem to be like Snow White, wandering around constantly accompanied by kingfishers, owls, bitterns, and whatever other majestic or rare wildlife happens to be in the area - people who keep seeing white tailed eagles over their gardens, I’m looking at you.

Kingfishers are one of the most magical birds to see so let’s start with them.

This section is probably unnecessary for many people keen to see a kingfisher, so if you’ve been staring longingly at the kingfisher page in your bird ID book for the past few years (I’ve been there, my friend), this is a quick recap.

First off, kingfishers are small. I thought kingfishers were much larger than they are before I first saw one, but they’re tiny. They’re about the size of a robin, although much heavier - not that you’ll be weighing it, but the weight difference is probably because they’ve got a much bigger head and beak.

Now that you know you’re looking for a small bird, there really isn’t much left to say when it comes to what they look like - the photos speak for themselves! Kingfishers have a bright blue strip down the back of their back and trust me when I say it really is neon. It’s often referred to as cyan - which is that very bright, blue-green colour of printer ink. On either side of the cyan strip are darker blue feathers, and the breast and eyeliner is orange. The blue parts of a kingfisher can appear green in certain light - more on that here.

Kingfishers have orange legs and a black beak, which has an orangey-red patch on the bottom in females. Juvenile kingfishers look similar, but are duller than the adults and have grey legs - it’s a bit like looking at an adult kingfisher with the saturation turned down. 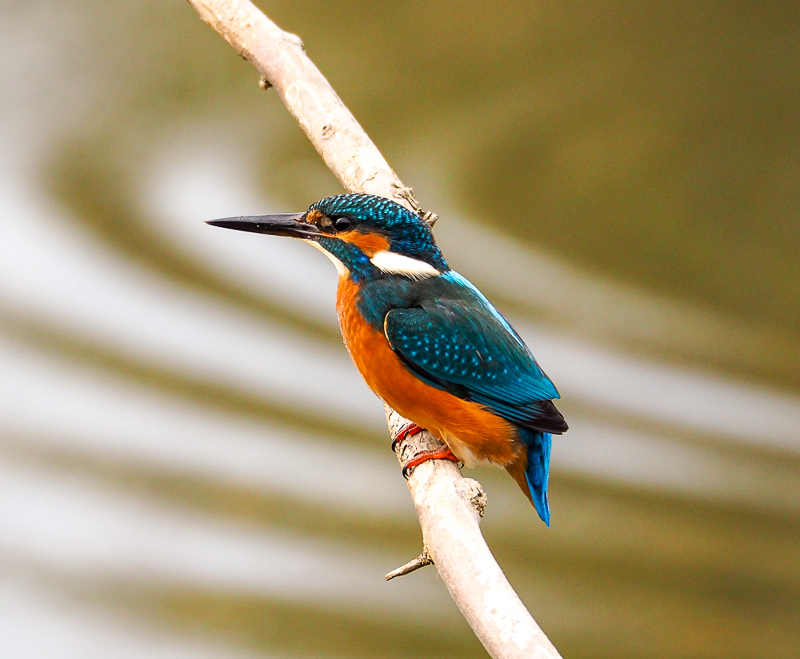 Possibly the best part about kingfishers are their incredible colour-changing feathers! 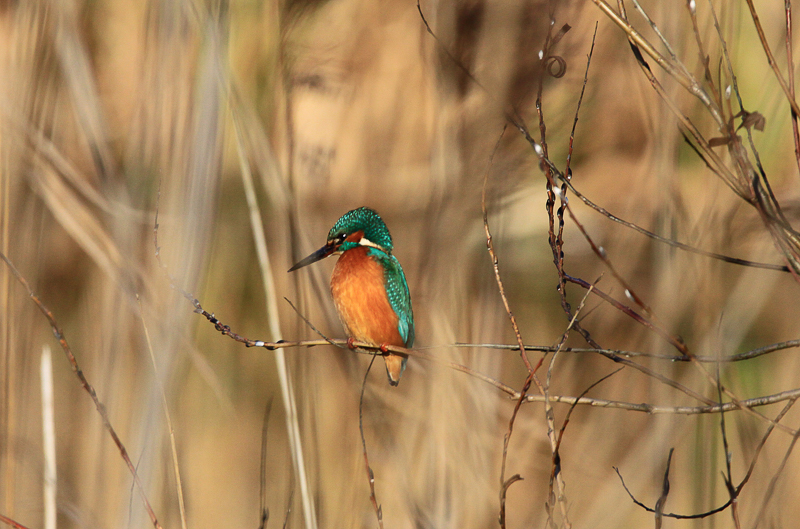 Kingfishers are widespread in the UK and they fish in freshwater habitats like rivers, ponds and lakes, and saltwater habitats - usually in winter - like at the coast or estuaries.

You don’t need to live next to a beautiful babbling brook to see a kingfisher - I’ve seen kingfishers along a canal afflicted with litter and bordering a building site - so don’t lose faith just because you don’t live in a national park.

Kingfishers like overhanging branches or perches. I’ve seen them engage in two types of fishing: perching and hovering. Perching is self-explanatory - the bird perches on a stick in or over the water and then dives down to catch a fish, usually returning to the same perch to eat it. Hovering fishing is something else entirely and is magic; the kingfisher hovers in the air like a little blue angel, keeping its head completely still - like a kestrel, but upright instead of horizontal - then dives into the water from the hover. Even when hovering, the kingfisher usually starts on and returns to a perch or branch.

Keep your eyes peeled (remember they’re only the size of a robin!) and look along the edges of waterways, paying particular attention to any sticks, posts or branches sticking up from or hanging out over the water. You might be deceived by some pieces of blue plastic at first, but eventually all that squinting will pay off! 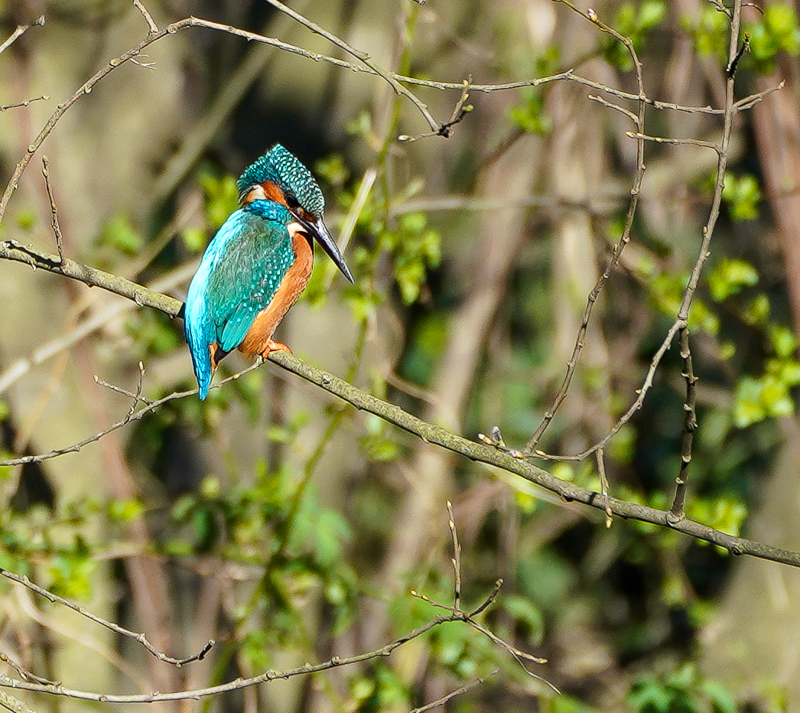 Generally speaking, if you see a kingfisher in flight it will be very low and close to the water. They’re fast, and they dart around just above the water’s surface - if you see a kingfisher from above when it’s flying (like if you’re on a bridge or riverbank) you’ll instantly be able to recognise that bright cyan strip down its back, which is clearly visible as it zips past you.

If you see the kingfisher from the side - for instance, if you’re watching it from the other side of a lake - it might look brown when it’s flying, because the undersides of its wings aren’t blue. They’re still distinctive - no other bird of that size in the UK flies fast and low over the water. Watch it until it perches and you’ll see the bright colours as soon as it turns or settles.

Don’t discount kingfisher-like birds you see out of the corner of your eye higher up near water. I recently saw a kingfisher perched on the post of a fence that was at least 8ft above the canal, and it flew off down the canal at the same height. I’ve also seen a kingfisher fly up over some trees when disturbed, so once you know what they look like you might see them in all sorts of places!

Kingfishers nest in a burrow that they dig into sandy riverbanks or stream banks. They don’t line the nest so you won’t see them collecting nesting material - they just burrow in 60-90 cm and then create a little dip to stop their eggs rolling out of the tunnel.

They lay their eggs in late March/early April and the clutch of 5-7 chicks hatch after around 20 days, with both adults incubating the eggs. The adults are very busy when they’re bringing up their little ones, as kingfisher chicks can each eat 18 fish a day!

After a few weeks of being fed in the burrow, the chicks leave the nest. They’re fed by the adults for a further four days - so you might see a family of kingfishers if you're in the right place at the right time.

Then the adults tell the first brood to get lost, kick them out of the territory, and get to work raising the next brood. 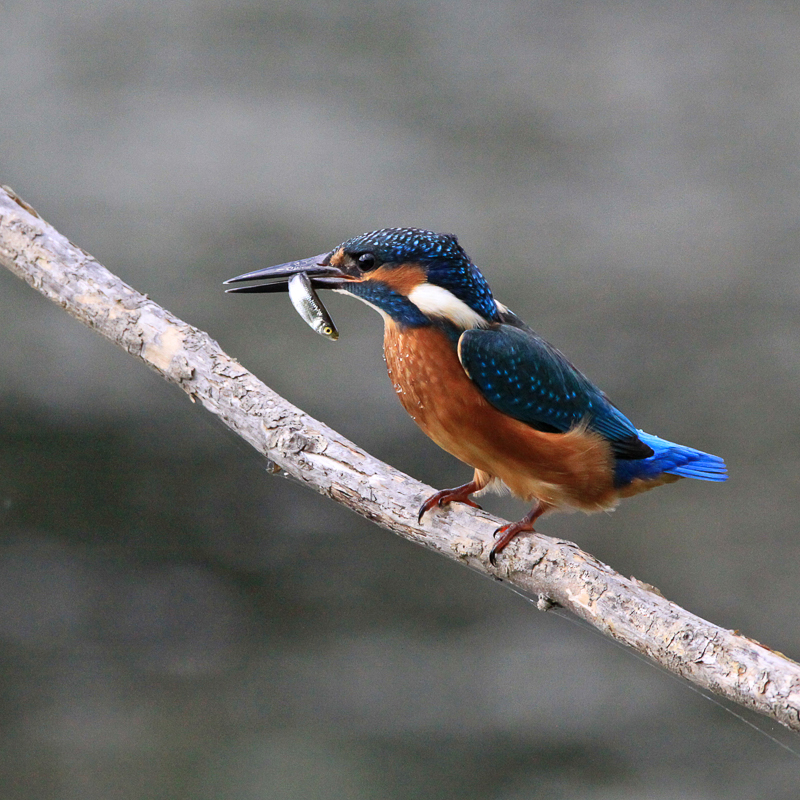 There are two approaches to birdwatching. You can find a hide or location that has regular kingfisher sightings and wait, or you can do lots of walks, runs or cycles along waterways and hope to see one by chance.

I take the latter approach, but I’ve seen kingfishers both ways and it’s equally rewarding whether you see them from a hide you’ve been patiently waiting in or whether you spot them on a run.

Some people will tell you that seeing kingfishers is a waiting game and you need hours of patience, but this isn’t true. If you’re dead set on seeing a kingfisher in a certain location on a certain day then, yes, you might be waiting hours, but you’ll see them just as often by chance. Read about the time I saw one within a few seconds here.

In fact, I know I said I’m not a Snow White but every sighting of a kingfisher I’ve ever had has been without much waiting, so don’t be discouraged if you don’t have the time to spend waiting around - after a while, you’re bound to get lucky or, more to the point, your learned skills in identifying and spotting kingfishers will pay off. 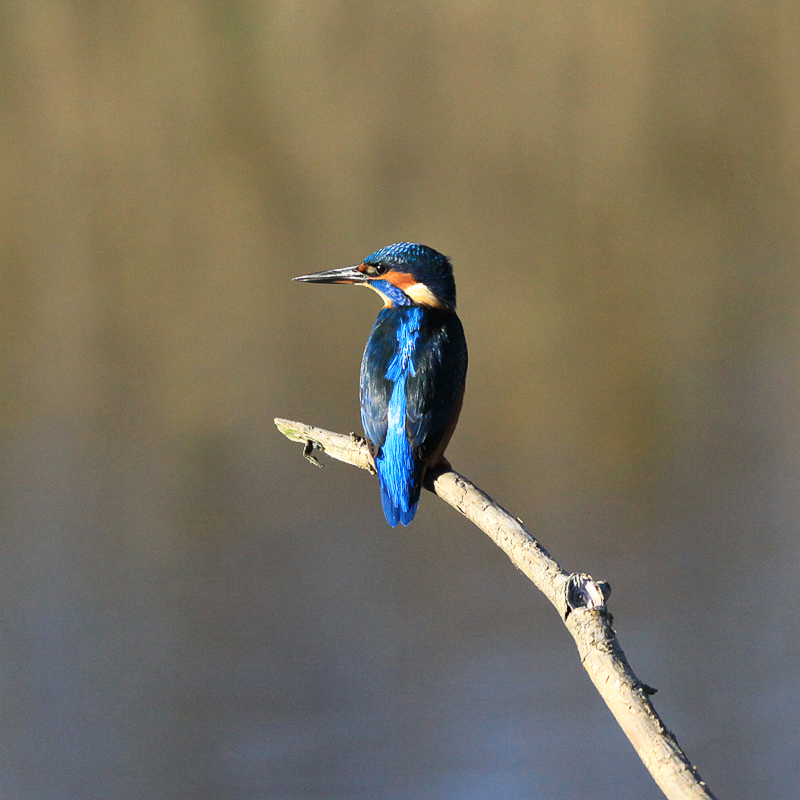 I’ve never been lucky enough to hear a kingfisher myself, but many people swear by spotting them based on their distinctive call. It’s high pitched and kind of scratchy, and is usually one high pitched call followed by another slightly lower pitched call with a short gap between the two, like "peep peep!".

If you’re desperate to see a kingfisher you might be tempted to find out how you can attract one.

Do not play recorded kingfisher calls or drop stones into the water to mimic fish to attract kingfishers. Anything that causes a kingfisher (or any animal) to needlessly expend energy poses a threat to their wellbeing.

Kingfishers are on the European Red List for conservation status because they have suffered breeding population decline. Please be respectful towards these beautiful birds and don’t interfere with their behaviour.

Usually kingfishers are shy and skittish. In a hide local to me, they will not land on the perch if people are making any noise in the hide at all.

If you know you’re likely to see a kingfisher and you want to take a photo of it, make sure your camera settings are as quiet as possible.

If you’re waiting for a kingfisher try not to make sudden movements when they approach or perch. I’ve seen kingfishers scared away by people quickly raising long lenses, so get ready before they arrive.

If all this seems a bit too secret agent for you, don’t worry - if you’re wandering along river banks or sitting a distance away from the kingfishers you’re less likely to disturb them, and I’ve seen just as many kingfishers when I’ve been walking along a canal or stream swinging my camera lens and chatting as I have when I’ve been silently sitting in a hide.

The point is, you need to be quiet and fairly still if you’re specifically waiting at a kingfisher’s favourite spot or if you’ve actually spotted a kingfisher so as not to disturb their fishing habits (and so you can enjoy watching them for longer).

We’re losing our connection with nature and it’s critical that we rebuild that connection and appreciation so that we can look after and restore our natural world. Many people would love to see a kingfisher - even if they don’t know how much they’d love it until they see it.

For lots of people it takes seeing particularly rare, unusual, or charismatic wildlife to ignite a passion for protecting the natural world and kingfishers definitely rank on the A-List when it comes to celebrity wildlife in the UK.

If you do see a kingfisher, share the experience with people you know. If there are people around the area that you saw it, let them know as you pass that you’ve just seen a kingfisher, so that they’ll keep their eyes peeled - add a little magic to their walk!

Sometimes people keep sightings and locations to themselves for various reasons - one of which is to keep wildlife safe. Whilst this is a valid concern, we must balance the small risk of someone doing something that would disturb wildlife with the need to encourage access to and appreciation of wildlife. A quiet and lesser-known hide with a close-by perch may be very vulnerable to disturbance, but a busy bridge over a noisy river or a footpath next to a stream is less so.

It’s all very well telling people to care about birds like kingfishers - but they might not even see one if nobody ever shares guidance about where to see them.

I’d love to see your kingfisher photos and talk more about these beautiful birds!

TO FLAP OR TO SOAR? BIRD FLIGHT PATTERNS AND HOW THEY INFLUENCE MIGRATION

Bird migration is a wonder. Half of the world’s 10,000 bird species migrate every year, with some return journeys clocking up 30,000 km – that’s a lot of flying. This post looks at different flight patterns

National Nest Box Week runs from 14th February each year, and its aim is to get as many people hanging nest boxes as possible! Spring is on the way, and this is the perfect time to get those nest boxes out for use this year!