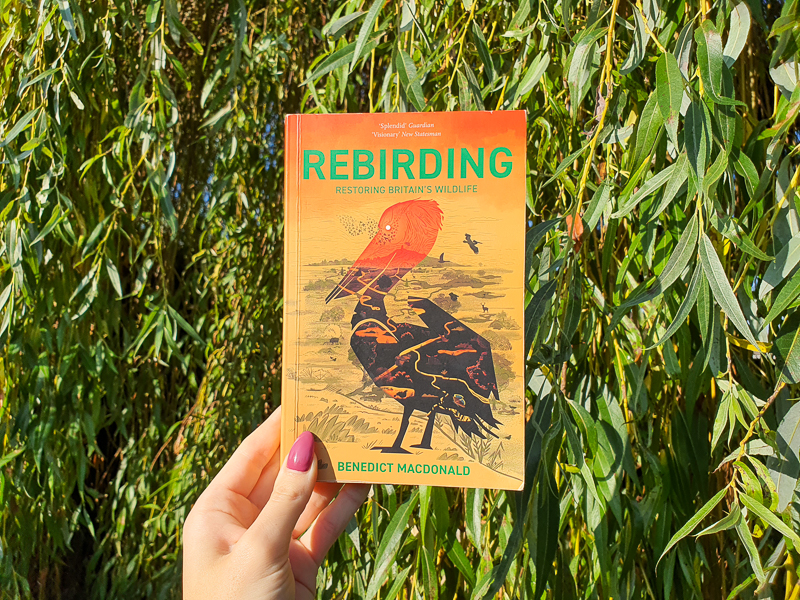 Rebirding has a special place on my shelf because it’s the first book I read about rewilding. That was happenstance – it’s not the first or last book on the subject – but means that it will always be the book that introduced me to the idea that we could return some of our land to nature.

As an alternative to traditional intensive oversight and management, wilding or rewilding is a conservation concept which is gathering increasing support, and which promotes minimal intervention to restore naturally occurring processes, habitats, and populations.

Rebirding is an in-depth look at the space we have in the UK and what we could achieve if we used just a small percentage of that space to bring wildlife back.

Of note is Macdonald’s financial analysis of the benefits of rewilding – something often missing from other books that argue for rewilding solely for the benefit of wildlife; Macdonald is all the more convincing for his intricate consideration of effects on local jobs and income.

I read this book a year ago, and at the time I absolutely loved it. I couldn’t put it down, and it sparked my interest in rewilding and gave me hope for the future of the natural world here.

Since then, Macdonald has come under criticism for his involvement in the Real Wild Estates Company – I won’t derail this review by going into the issues with the proposition of this company but suffice it to say it isn’t how I envisaged the rewidling movement making progress (even if it’s perhaps foreshadowed by Macdonald’s economic focus which I praised earlier). Initial responses to valid questions or criticism of the proposition were defensive, confrontational, and missed opportunities to listen to and include local communities and act in a way that respects the cultural importance of local decision-making regarding land use. Such responses have since been deleted, so let’s hope that the people involved in the company are reconsidering their approach and taking the feedback on board.

Let’s get back on track. You don’t need to agree with everything an author says and does to value their work. The implementation of rewilding that Macdonald is now involved in doesn’t accord with my own preferred approach, but that doesn’t detract from the value of Rebirding as an informational text on the subject.

If you’re looking for an introduction to rewilding, wondering whether we’ve really got the space for it, want to find out more about reintroduction potential, or want an overview on some of the main issues derived from our current land use and the economics behind them, then this is a brilliant book to read.

I’ve read many books about rewilding since Rebirding, and none are quite so comprehensive nor quite so effective at giving the reader a grounding in the key issues and context. It shouldn’t be the only book you read about rewilding, but it’s certainly a powerful addition to your shelf.

SECRETS OF A DEVON WOOD

The pages are so beautiful that this book would make a great bedside of coffee table book, if only it were possible to put it down.

Thinking about starting a science communication venture? Here's what I learnt in my first year.

Suzanne Simard tells the story of how she and her teams made discoveries that changed the way we look at trees forever.