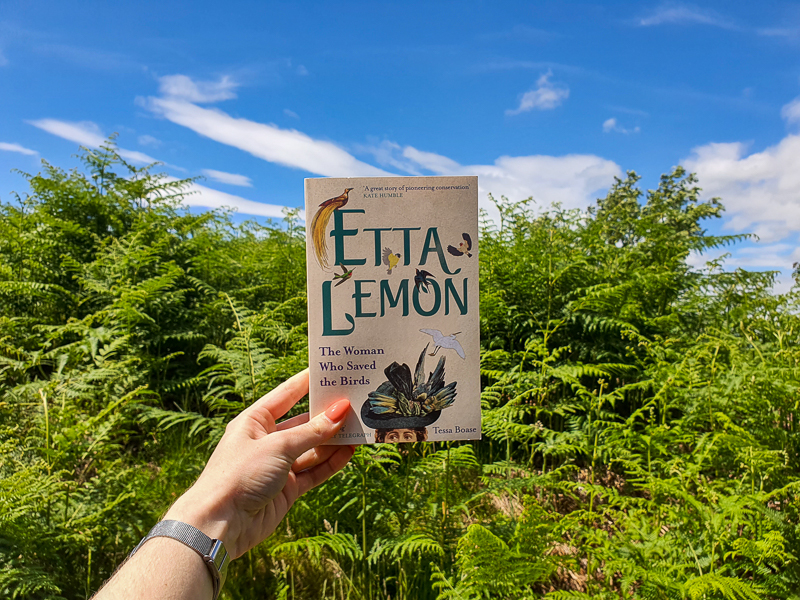 This book is a treasure.

I don't usually like biographies, so know that I really mean that.

Etta Lemon follows the life of the woman responsible for the formation of the Royal Protection for the Society of Birds. The RSPB today is one of our biggest conservation charities, often described as a behemoth. And it started with women.

A review on the back cover of the book describes it as a triumph. It is. Boase doesn't just tell us about the life of Etta Lemon, she transports us back in time to follow the story of the RSPB.

A brief history of the RSPB is perhaps relatively common knowledge: it was formed in response to the slaughter of wild birds for use in millinery (hat-making). To distill such a vivid story into something as dull as a feather in a hat is a travesty, one that Boase unwinds with her transportive writing.

The detail of this book sets it apart. It's immersive. It conveys respect and attention to Boase's subject. Multiple times during her research Boase was told there wasn't much to be known about Etta Lemon and the women of her time. This wasn't true; it's just that nobody had bothered to look.

Boase uncovers a wealth of information, taking us into the lives of Etta Lemon, Emmeline Pankhurst (of suffragette fame), Alice Battershall (a feather worker), Emily Williamson (also instrumental in the formation of the RSPB), Winnifred (the Duchess of Portland) and other women and men involved in this fascinating history.

The specificity of the book fascinated me. Boase doesn't just talk about trends, attitudes, movements, she talks about these women, those hats, this millinery shop, that court trial, this job. Meticulous research through archives, interviews, and even knocking on people's doors led to a depth to the narrative that I've never experienced before.

Instead of following only one person, Boase explores the life of several women affected by the movements of the time. The information is real, personal, comprehensive. I dislike pitting women against each other, but the contrast between Etta Lemon's bird protection movement and the campaign for the vote didn't do this; the book is respectful to the views of both women, which in many ways were opposed, and is grounded in an understanding of what it was like to live as a woman at the time.

At times, I felt overwhelming rushes of love and respect for these women. I felt heartbroken that they had been so callously forgotten, in a way that male founders rarely are.

In 1989, when Emily Williamson's house got a plaque to mark the place 'where the Society was founded one hundred years ago,' the RSPB managed to get the name of the man unveiling the plaque onto the plaque, but not the names of the women who actually founded said Society (or even the name of one of the women, whose house the plaque was on).

Etta Lemon finally gives women like Etta the esteem that they deserve. Now, whenever I linger at an information board in a country house or read about the history of some person or other, I find myself wishing that someone like Tessa Boase had written about them, so that I could lose myself in that time, that place, that life.

THE MOST PERFECT THING

A detailed exploration of what we know (and don't know) about birds' eggs. If ever you feel your awe at the wonder of the natural world fading, pick up this book.

IS CLEANING OUT NEST BOXES ALWAYS A GOOD IDEA?

We're often advised to clean bird nesting boxes between breeding seasons, but is the practice supported by science?

Thinking about starting a science communication venture? Here's what I learnt in my first year.